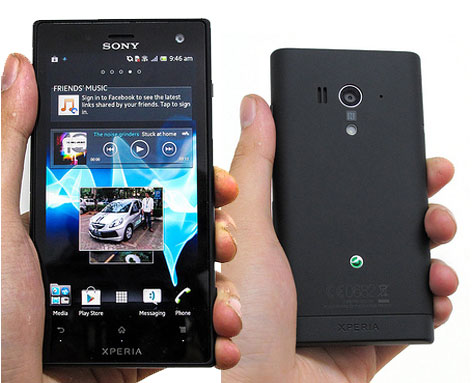 Phones or electronics in general is not stuff that can be exposed with water. Water can seep in and damage the sensitive components.

It does not apply to Sony Xperia Acro S. This smartphone made by Sony, wrapped casing that IP-57 certified. That is, Acro s can last for about half an hour in water depths up to 1 meter. In addition, the smartphone is also dust-proof and impact resistant.

Not only made ​​from tough, component S was powered Xperia Acro. Qualcomm MSM8260 processor Sony embed (S3) dual-core processor speed of 1.5 GHz with 1 GB of RAM and the Adreno 220 graphics use.

In addition, there are many more offered by this smartphone. For more discussion, please refer to the following reviews.

The impression is minimalist and classy, but somewhat difficult to distinguish from fellow brothers Sony Xperia smartphones. At the front there are three soft buttons, the “home”, “return” and “menu”. There is also a front camera unit with a resolution of 1.3 megapixels which can record 720p video.

The back of the Xperia Acro’s made ​​of finely textured rubber like plastic. A main camera with 12-megapixel resolution is similar on the Sony Xperia Ion, placed here. The battery can not be replaced because this smartphone case can not be opened. With a thickness of 12 mm and weighing 147 grams, the Xperia Acro S feels a bit “fat”. On the right side there is the power button, volume control, and camera.