I met Robin several times and did a reading for his now ex-wife, Marsha, a Q Clubs. I was curious and I asked her, “I see Robin as this happy go lucky guy who is always up. But I know 7 Clubs have the opposite down times too. Does Robin get very down and depressed?” She said yes, he did, and often, but only those who were close to him ever saw that. To all his fans and to people who visited his home, he was always Mr. Super Up.

This is also true of ex president Bill Clinton. Look at the bags under his eyes for clues about the down side of the 7 Clubs. Seven is always a magical number, sitting in the middle of its suit, with one foot in the mundane world and one foot in the spiritual.

The Seven acts as a bridge between the two, and has the capacity to tap into the spiritual side where there is unlimited resources, higher knowledge and unlimited creativity. The 7 Clubs in particular has a J Spades as its second Karma Card. This positive Jack expression always brings a mental gift. 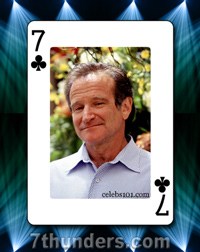 The 7♣ in particular has a J♠ as its second Karma Card. This positive Jack expression always brings a mental gift. They also have the J♣ in Mars and the J♦ in Pluto, further evidence of mental creativity, which abounds in these people. For Robin, of course, this was expressed through comedy. And he was able to tap into a realm of continuous inspired comical information which amazed everyone. That was what he was known for. And that was his 7♣ high-side expression. And that is how we remember him.

But he was also a 9♥ and even if he wasn’t a 9♥, the 7♣ has its down side. In between periods of mental luminosity and perfection, the 7♣ person has serious bouts of depression and negativity. The 7♣ is like a pendulum that swings from one extreme to the other. On the low side they cannot see much good or happiness in anything. But the 7♣ person places a lot of value on their image.

The 8♦ first Karma Card tells us that they want to be recognized and have a shining (Sun Card) reputation. So, this down side is kept secret from the rest of the world. Only those close to them get to see this. The 9♥ also, is a card of tragedy, and especially tragedy on the emotional or relationship level. In itself it carries a somewhat dour attitude about life.

And though Robin was a famous person, his personal life was equally important to him. And as a Cancer Sun sign, his home and family held equal importance. But in these areas there were losses and separations as he struggled for happiness. Though Robin was handsome and masculine, he was also very sensitive emotionally. He never took anything lightly.

He had a potential for taking drugs since his early days on the comedy circuit. It was probably his only way out sometimes from his depression and his mind. When you think about his incredible gift, just imagine for a moment what that kind of incredibly powerful mind could do to a person when it goes the opposite direction. It was self torture on a grand scale. Rumor was that he was highly depressed just before his death. He was found dead by hanging himself.

In his cards, he has the classic death cards. He was in his Mercury period with a 9♥/5♠ in his Birth Card spread and a 9♠/2♥ in his Planetary Ruling Card spread. The 5♠ often appears at the time of death. I think in this respect it represents the last journey. It is interesting that it was a 9♥ and 5♠ together because the 9♥ is his ruling card.

Because Fives represent dissatisfaction that leads to change, it could be interpreted that the 9♥ part of himself just got fed up with his life as he was living it and decided to leave. The 9♠ in the same period under his 9♥ spread seems to say the same thing. I think it was a sudden (Mercury period) decision to just leave. It is unfortunate, in my opinion, that Robin didn’t have someone there who could have helped him through the dark period he was going through. His death, among all the deaths of famous people lately, seems to haunt us the most. He is certainly missed. 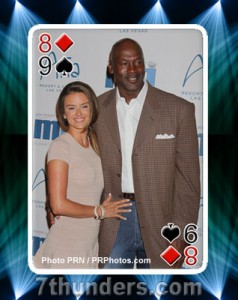 Michael Jordan is one of the most successful basketball players in history. And being an 8 of Diamonds, fame suits him   perfectly.

It is, after all, the Sun Card. Michael was married once and has three children by his first wife. Usually 8 of Diamonds people have multiple marriages, as many as five or six. And usually 5 of Clubs people don’t even get married.

So, Michael is somewhat an exception to the general rule when it comes to his cards. 5 of Clubs are also known to love secret affairs, lots of them.

Yvette is a former model, and very beautiful indeed. There is not a lot of information about her other than she was born in Cuba. Her cards point to some challenges in marriage too. The J of Spades often love to keep their freedom. The 9 of Spades is marriageable, but often difficult to live with. Their K of Hearts first Karma Card causes them to be very strong-willed and demanding. 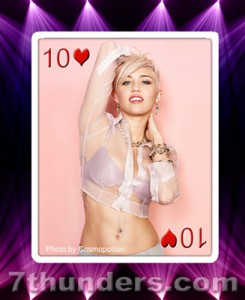 The many loves of Miley Cyrus

It is interesting that many of the cards in the Jupiter line of the Grand Solar Spread have a lot of selfishness to account for. This is because this line contains two Tens and two Aces. And if you are one of these Tens, the 10 of Hearts or 10 of Diamonds you are already self-absorbed by your number. But in addition, you have the two Aces, the A of Hearts and A of  Diamonds. 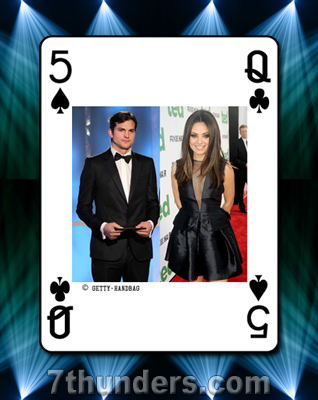 Both Ashton and Mila have had serious relationships before, even though they are still quite young. Ashton married Demi Moore when he was only 28 years old, a marriage that lasted 6 years.

Mila dated Macauley Culkin for nine years. She was never interested in marrying Macauley, though that relationship was significant.

What is interesting is that Macauley is a K♥/K♦ so that he and Ashton share the same Planetary Ruling Card. Not only that, but the 5♠ has a K♥ first Karma Card.

In a way, Ashton is very much like Macauley and one could say that Mila is doing a repeat. But, there are some significant differences here that put that concept to rest. And mostly with the connections they share with Mila.

Mila’s Q♣ shares a strong Venus connection with both the K♥ and K♦. But as good as Venus is, without something other connections there might not be any real glue to hold a couple together. And with Ashton there is such a connection and it is the most powerful connection between them. That connection is a direct Neptune connection in the Life Spread. This is between their Birth Cards.

The thing about Neptune is just how powerful it is. If you fall in love with someone who is your Neptune card, you will probably love them for the rest of your life, regardless of what happens or if you split up. And Neptune is probably a very good connection to have when you are with someone with a K♦ Planetary Ruling Card.

The K♦ can be very difficult to live with. A strong Neptune connection like this will shield her from this harshness that can surface from time to time.

Both Mila and Ashton are successful actors, much more than Macauley Culkin, but Ashton is a hundred times more successful that Mila. That is not necessarily a problem but there is a big difference in their so called ‘star power’ as Ashton is playing lead role in a top sitcom.

Kutcher and Demi Moore never had any children, she already had some with Bruce Willis. But now Mila is pregnant and is engaged to Kutcher.

Both Mila and Ashton have baby cards showing up in the next year and marriage cards too. I think they have a lot of compatibility. The Q♣ doesn’t have great relationship karma, however. They do have them but there are usually problematic.

Mila shares a birthday with Halle Berry. Female Q♣, even though highly successful, find personal relationships challenging. Between Mila and Ashton, Mila will probably be the most ‘activated’ and have the harder time.

There are no Moon connections between these two, which is interesting. What that means is that neither of them is the designated leader of the relationship. The Neptune connection is what has drawn them together. And it is enough glue to keep them together for a long, long time.

Following are the services:...

You can order the Destiny Reading Report or the Relationship Report or both. For

Spiritual Article 23rd May 2015What is consciousness?Consciousness is something abstract. To many of us,

Ooi Chin Wah is the founder of Ancient Science of Cards, a company which  offers the ‘Cards of