Icomania guess the icon quiz answers level 1 to 900 a fun cartoon guessing game which has so many level to play. You can play this word game using android smartphone or tablet with low specification but if you want to record the screen while play the game you must use higher RAM or at least 1 GB. We found the different level show in other device so we post this cheats by a letters used to make it easier to use by other player. 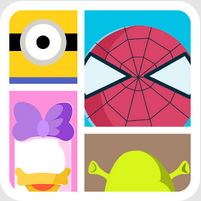 When you stuck with this icon game, then you need this icomania what’s the