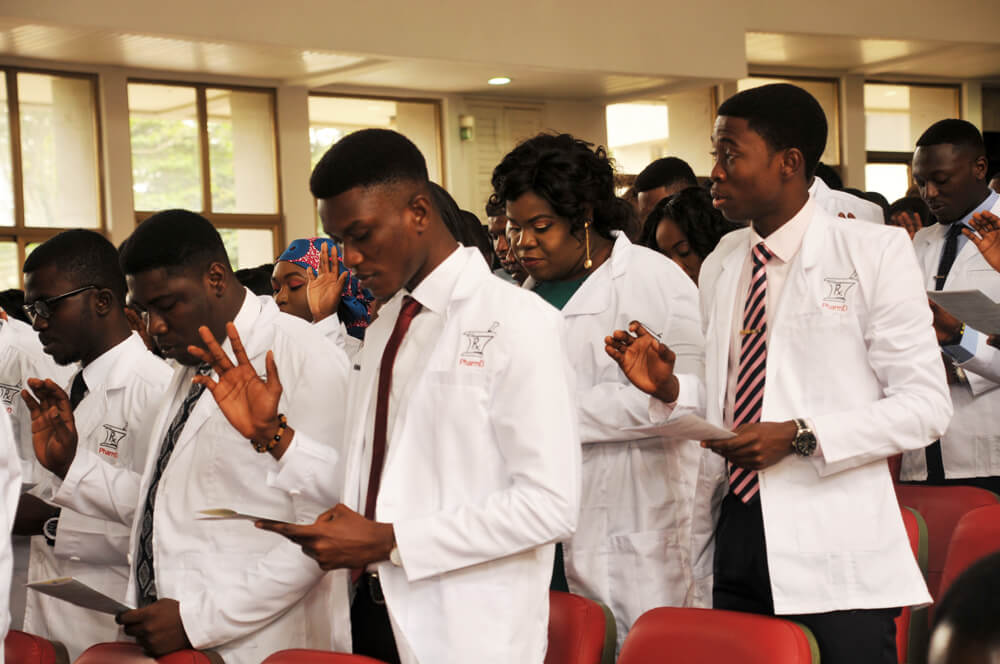 The Faculty of Pharmacy and Pharmaceutical Sciences (FPPS) of the Kwame Nkrumah University of Science andTechnology(KNUST) has held its 2nd White Coat Ceremony on the theme: “Impact of the PharmD Pharmacist on Pharmaceutical Care”. The ceremony saw over 200 Doctor of Pharmacy students being robed by their prefectors. Professor Mrs. Frances Owusu-Daaku, Head of the Department of Pharmacy Practice, administered the white coat pledge and faculty, key preceptors, pharmacy alumni and parents helped robed the students in their white coat.

In her welcome address, Professor Mrs. Rita Dickson, Dean of FPPS, stated that the Ceremony is symbolic as it signifies a transition from the study of preclinical knowledge to the acquisition of clinical knowledge. According to the Dean, it also transitions a simple scholar to a pharmacy apprentice within the confines of the Pharmacy profession, into the last two years of their PharmD training.

Professor Mrs. Dickson stated that after four years of rigorous academic and professional training, she hoped the students would exhibit the highest principles of moral, ethical and unique responsibilities entrusted to them in their training.

She also used the occasion to challenge the students to become one of the best healthcare professionals,Ghanahas ever produced.

In his keynote address, Mr. Benjamin Kwame Botwe, President of the Pharmaceutical Society ofGhana(PSG), said the future of pharmacy looks bright with the current trends in pharmacyeducationby KNUST.

He noted that pharmacy leaders globally especially in the United States and the United Kingdom have reviewed their code of ethics which has led to a paradigm shift in the profession. That is, from product –centered to a patient-centred practice.

Mr. Botwe noted that pharmacyeducationhas progressed consistently from the apprenticeship model to a scientifically rigorous pharmacyprogrammewhich incorporated increasing years of study and the impetus of a strong foundation in the fundamentals of pharmacy to a more patient focuses curriculum.

The PSG President, charged the students to help make exploits in drug discovery and research and to come out with new candidate molecules for existing tropical neglected diseases particularly, emerging and reemerging and unknown clinical conditions.

He also challenged them to be lifelong learners and undertake professional development and to make use of opportunities available at the College of Pharmacists.

Reverend Professor Charles Ansah, Pro Vice-Chancellor, paid tribute to all faculty and staff whose dedicated work had resulted in what is being witnessed in the Faculty currently.  He noted that the FPPS is one of the strongest faculties in the University and challenged the students to make an impact in their practice as well as treat their patients with utmost care and integrity.