EA has shared more details regardingMadden 18’s Ultimate Team, revealing today the rewards for MUT Champions and Weekend League. For those of you already familiar with MUT Champions, let’s get right to it. 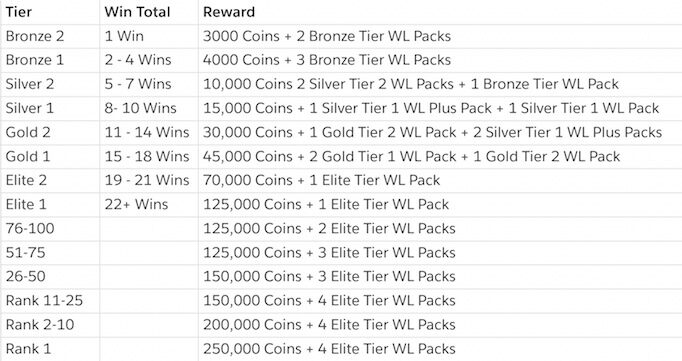 The Elite Tier WL Pack is new to Madden Ultimate Team this year, called a “Fantasy Pack.” This lets you open a pack and see everything inside. After seeing everything, you make the choice of which item you want to select. So, in the case of an Elite Tier WL Pack, you would see three players, all of which will be elite. You then choose one of those three players, and he’s now a part of your team.

How to Participate in Madden 18’s MUT Champions

For those of you unfamiliar with Madden Ultimate Team or MUT Champions, let’s go over the format.

Each week, your goal is to qualify for the Weekend League. You can qualify in a number of ways:

Win three games in a row, with only eight total chances to do so.

The threshold will likely start out fairly low at the beginning of the year, and increase as time goes on. EA explains:

“But you’ll only be required to complete a Season at a specific division to earn entry into Weekend League. For example, say we make the requirement Pro 2nd String, for launch. That means you only need to reach that Division, and finish your Season (it doesn’t matter if you don’t win any games or win the Super Bowl) prior to the Friday morning’s cutoff to earn your spot in that week’s Weekend League.”

Madden’s Weekend League runs from Friday morning to Monday morning. During these 72 hours, you can play up to 25 games, with a goal of winning as many as you can in that timeframe. The more you win, the better the rewards you’ll earn.

Players participating in Weekend League earn coins after every game based on the result (1,000 coins per win; 500 coins for losing and playing past halftime). But the big rewards won’t be handed out until Wednesday after EA’s security team weeds out any suspicious behavior.

Head over to ourMadden NFL 18 Ultimate Team hub page for all the latest news!