From various apple products that apple has been released so far, ipod nano is undoubtly one of the most popular apple products that apple has released. From ipod shuffle, to ipod nano, and even ipod touch, all of the variants are already proving their standard as successful product line in the market. From the various ipod that apple has released so far, now we would like to bring you into more details of one of the ipod products that is ipod nano 5th generation 16 GB. We would like to review this product by giving you a deeper look on the positive and negative sides of this product. 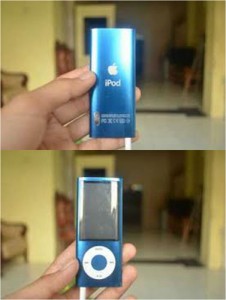 First, let us start with the positive sides of ipod nano 5th generation 16 GB. The most apparent positive sides of this product is of course the design, because a design of a product is the first thing that we judge whenever we are looking at a new product. Coming in a simple yet sophisticated aluminium design, this product looks remarkably stylish. The sleek design also add simplicity on the product plus make it lightweight and convenient to carry. Having a total capacity of 16 GB for storage, this device can store up to thousands of songs and photos in your ipod. The battery life also can keep up to 24 hours of music playback. So for the positive sides, overall ipod nano 5th generation offers you powerful device despite it’s tiny little design. 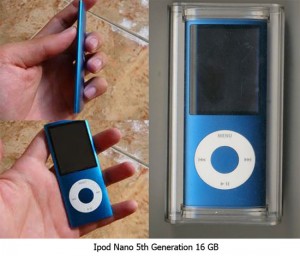 As for the negatives sides we also notice some of negative things in this device. The first thing is about the earbuds, the bundled earbuds that comes with the devices is rather uncomfortable to use. A bit unconvenient when you put it on your ears. The other negative things that we notice is about the video recording, it is a bit bad if you record your video in a low light. Well, now we think it is enough with the positive and negative sides about this product. In overall, we think that this ipod nano still can be a worthy investment of your money despite some of negative things that it carries.