Answers for 7 little words daily puzzle April 27 28 and 29 for this question: in a feeble manner, reflected back, suspension of operations, brotherly, X and Y, switched between windows, views or prospects, Dickensian Heep, like tears, someone who tries very hard, pertaining to sole of foot, on the spur of the moment, preceded in time, actress Kidman, nuts in pralines, “Billy Bathgate” author, minor accidents, huge shopping center, quality of some wild meat, places to raise cattle, rained cats and dogs . 7 little words is addicting word game, but not easy to solve the puzzle so I create this cheats to help other player solve the game before they give up, with the difficult question. This game not only for android but iPhone and ipad user can also play 7 little words in their device. So if you stuck in this game just find the answers at our result below. 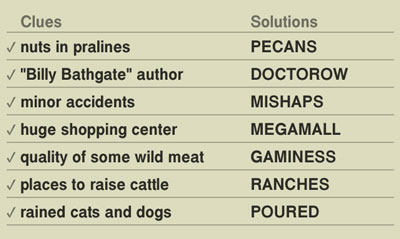