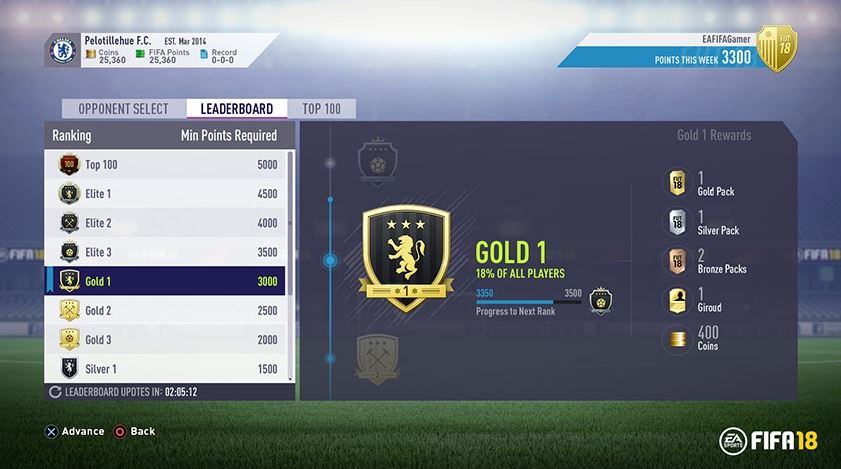 Squad Battles offers players who may not want to compete directly against other humans a competitive single-player mode that will allow you to challenge pre-determined squads against FIFA 18’s vastly-improved AI.

Every week, you’ll be able to jump into Squad Battles and play new opponents. The catch is that these squads will have been created by real life players or influencers in the community.

In Featured Squad Battle you can challenge the squads of your favourite content creators, footballers, pro FIFA players and celebrities. pic.twitter.com/uDUY3gpUaz

“Online is not always for everybody, and then also it can be really intimidating to get into. This is a competitive way to play single-player,” EA explained. “It’s going to have the best rewards in FUT for playing single-player.”

Similar to FUT Champions, each win will net you a certain amount of points that will rank you in a rewards tier. The amount of points you receive per win will be determined by the difficulty you choose and the skill and chemistry level of the opposing squad.

Squad Battles isn’t designed to replace FUT Champions, but instead offer a competitive outlet for those who prefer single-player, but still want to participate in FIFA 18 Ultimate Team without the rigors or stress of The Weekend League.

“Compete and earn rewards in the all-new single player Squad Battles. Take on other squads from the FUT community, to earn rewards and move up the leaderboards. In the Featured Squad Battle, you can also challenge the squads of football players, pro FIFA players and celebrities to test your skills and build your team.”

FIFA 18 may be around the corner, but EA is still keeping us glued

While EA has been slowly revealing the top 100 players in FIFA 18, today

It’s that time of year: the best footballers of 2017 will be named in

With FIFA 18's demo launching today, EA has revealed both the minimum and recommended

EA has begun lifting the curtain on FIFA 18 Ultimate Team (FUT 18), which