Knuston Hall is a Grade II listed Adult Residential College & Conference Centre located near Rushden in East Northamptonshire, part of Northamptonshire County Council’s Customers, Communities and Learning Directorate. The facilities are available for a wide variety of events including meetings, seminars and training. Knuston Hall also has a comprehensiveprogrammeof study breaks and courses for adults throughout the year. Call 01604 362200 for details

The History of Knuston Hall

Back as far as The Domesday Book, the history of the hamlet of Knuston and Knuston Hall itself provides interesting reading for guests.  From 1086 to the present day, the brief history below provides an insight into the current Knuston Hall as we know it, including evidence that Knuston Hall has had links with adulteducationwell beforeNorthamptonshire County Councilpurchased it on 3rd May 1949.

1086:  Knuston (or Knoston) is mentioned twice in The Domesday Book.  It is likely that there were two separate parts of the hamlet, owned by Gunfrid de Cioches and William Peverel.
1242:  Walter de Knoston held the land in the Honor of Chokes 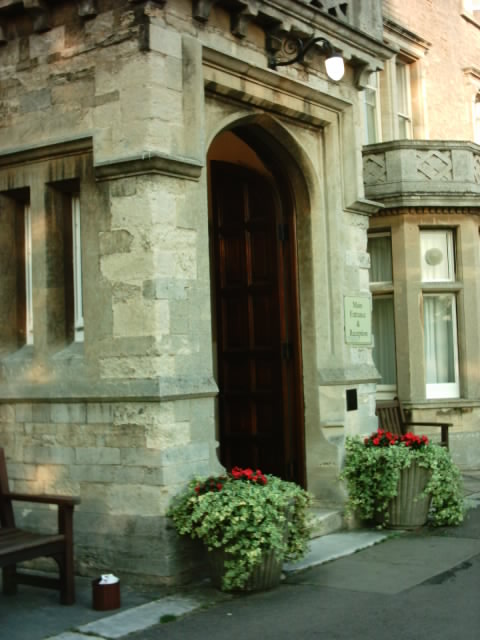 land in the parish three centuries later.
1670:  Hearth Tax records suggest a “substantial house” at Knuston, having eight hearths. It was called Hill House. The ground floor of Hill House is currently The Dining Room and surrounding area and the first floor, bedrooms 17, 18 and 19. Guests can appreciate the original nature of Hill House by standing at the far end of the croquet lawns, looking back at the outside of the dining room. Hill House was the small ‘bay-windowed’ manor house between the two current chimneys. It is thought that the bay windows in the dining room and in bedroom 19 are original.

1769:  The Hamlet of Knuston vanished through an Enclosures Act in 1769 and at this time the grounds were laid out as park land.  ‘Hill House’ was developed (probably with the addition of what is now The Lounge, Panelled Room and bedrooms 11-15 and 42-47) to become the rather more grand ‘Knuston Hall’.

1775:  Benjamin Kidney, a London Merchant and High Sheriff of Northamptonshire, may have been the person responsible for much of the development around this time, spending in the region of £10,000 on the building.
1780:  First record of a mortgage linked to the estate.
1791:  Knuston Hall was sold to Joseph Gulston but it was actually occupied by a variety of tenants at this time.
1831:  The Hall was occupied by Sir Peter Payne, who was a staunch opponent of the slave trade and an early advocate ofhigher educationfor women. Memorials to his family are still in evidence in the church of St. Catherine in Irchester.
1834:  Around this time it is known that Knuston Hall lay empty for some years.
1849:  The property was leased from Alan James Gulston by Edward John Sartoris for £160 a year until 1852. Edward’s brother lived nearby at Rushden Hall and his wife was Adelaide Kemble, a famous opera singer. Her sister was Fanny Kemble, a very famous actress. Frances Kemble (cousin of Fanny) married Robert Arkwright in 1949.
1851:  Census night at Knuston Hall on 30th March 1851 saw records made of four members of the Sartoris family, two members of the Kemble family and twelve servants.
1865:  The Knuston Hall estate was bought by Robert Arkwright (great grandson of Sir Richard Arkwright, inventor of The Spinning Frame, but NOT of The Spinning Jenny).  He (Robert) made major extentions to the house by adding the area now known as the entrance hall, the main staircase and bedrooms 1-9.  At the same time, the current lounge was created from two rooms as the current ceilings show, followed by the addition of the two bay windows. At the same time, the current stone corridor and the equivalent corridor on the first floor were created when the old staircase was removed. These alterations were said to have turned the house into ‘a mansion’.
1881:  Several ‘Lacemakers’ are listed as being resident in the Hamlet of Knuston.
1885:  Sir Robert Arkwright reliquished his Mastership of The Oakley and as a mark of gratitude, he was presented with the picture which hangs in the main entrance hall. The picture shows Robert Arkwright on his favourite horse ‘Sportsman’ accompanied by three of the Oakley pack, Racey, Bridesmaid and Graceful.

1888:  Robert Arkwright lived at Knuston Hall until his sudden death on 1st December aged 66
1901:  E.C. Browning J.P. was in residence followed by Sir Edward Chandos Leigh K.C.
1898-1920:  The Arkwrights owned, but did not always occupy the house throughtout this period, leaving it either in the hands of caretakers or tenants.
1905:  H. E. Bates was born in Rushden. His novel “Spella Ho”, first published in 1938, is based around “a country mansion” called Spella Ho which is undoubtedly modelled on Knuston Hall during the period when it was owned by The Arkwrights.
1920:  At 4pm on 10th April Knuston Hall was sold at auction at The Swan Hotel in Bedford. The vendor was a Robert Oakley Wigram Arkwright, grandson of Robert Arkwright who died in 1888. The purshaser was Mr C.A.K. Green of Rushden who paid a total of £9184 for the estate, including two cottages.
1939-44: During the Second World War, Knuston Hall was used by The British and Canadian Armies as a transport depot.
1949:  Northamptonshire County Council agreed a sale price of £12,000 for Knuston Hall on 3rd May. The date of purchase is recorded as 12th October.

1950:  On 9th January, The Minister (ofEducation) agreed to the use of Knuston Hall as a Residential College of Adult Education.
1951:  Miss Edna Smith was appointed “Warden”, a title which lived on until the early 1990s.

Please contact The CentreManagerwith any detail of history that could add to the records above, in particular, items relating to The Arkwright Family or The Green Family.

Contact Cape Coast University School Of Distance Learning Contact UCC All enquiries should be
Admission requirements for Pentecost University College are as follows; Professional and Short Courses The