With the rise of social media all across the globe, we are bound to come across many unfamiliar abbreviated words everyday. While the popular slangs are being used in daily conversation online or while texting, there are many new ones popping every few seconds without our knowledge. If you are not up to date, we have your back.
Here we will tell you what many of the online slangs mean and its different usage. But today we will focus on ‘HMU’.
I mean you probably clicked on this wanting to know what ‘HMU’ mean anyway so let’s get started. Everything you need to know about ‘HMU’ is broken down in bits and pieces for you in questions and answers format. 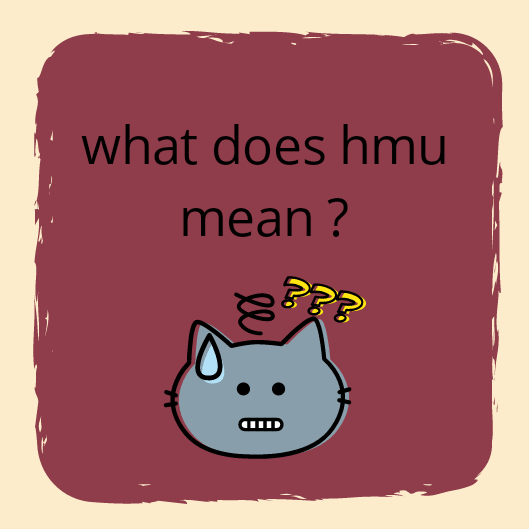 What does ‘HMU’ stand for?

Just like many other popular slang like ‘lol’ which stands for ‘laughing out loud’, ‘HMU stands for ‘hit me up’. ‘HMU’ is a slang that is gaining popularity amongst the younger generation. While you have ‘lol’ thrown at you by your aunts and uncles, you would hardly find any aunts or uncles saying ‘HMU’ to you.

What is the meaning behind the use of ‘HMU’?

Now that you know what it stands for, some of you are probably wondering ‘but what does it mean when I use it?’ while the rest has a grasped on to the whole concept of ‘HMU’.
When you use ‘’HMU’ online or while texting, you are basically indicating the people you are communicating with ‘to hit you up’ because you are most likely bored and want someone to talk with. It is a very casual and chill word; people usually use this to flirt or just with their friends. Like any slang words, when you use ‘HMU’ in a sentence, it becomes informal. So it is best if you don’t use it while communicating with someone older or in business talk.

What does HMU mean in a text?

Let’s go deeper into the ‘HMU’, as we have explained above of its meaning, now we will focus on its meaning when it comes to texting. It is used to say ‘text me’ or ‘ring/call me’.
‘HMU’ is mainly used while texting. Majority of the population use ‘HMU’when they are talking to their mutual or acquaintance in the process of getting to know each other. It is a simple way to start a conversation like “hey ive been wanting to talk to ya for a while you should hmu sometime”.
The other way it is used while texting is when you are flirting. Not to generalise but ‘HMU’ is a slang that is very popular amongst ‘fuckboys’, who just wants to start a conversation with no purpose or meaning other than trying to gain a sexual contact.
“Hey u so cute..im bored so u should hmu baby”

What does HMU mean in on instagram and snapchat?

Similar to texting, ‘HMU’ is used in the same way on instagram and snapchat. It is used to say ‘text me’ or ‘ring/call me’.
Usually many would put “so bored someone hmu pls” as their caption on instagram which usually just means people want someone to talk to because they are bored but it could also mean they just want the ones who will send them nudes and have sexual/dirty conversation. This all depends on the way the person has phrased ‘HMU’ and the kind of person they are. Usually the ones who want something sexual out of the conversation have a wink emoji or a tongue emoji at the end of the caption.
It is the same on snapchat, it all means the same and holds the same value and meaning.
We have come to an end and we hope you now know what ‘HMU’ stands for, its meaning and what it means on texts, instagram and snapchat. Hopefully, you have deeper understanding of this online acronym.
Final advice from us is to only use it online or while texting your friends and acquatainces. It is not appropriate to use it while texting your parents, uncle and aunts.